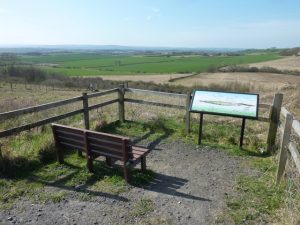 The Limestone LinX project has scooped a major environmental award. The ‘Altogether Greener’ County Durham Environment Partnership Awards Ceremony was held at the Radisson Blue Hotel in Durham on 9 October. The Limestone LinX project was presented with the main award in the Community Partnership category. The awarding judges described the project as a fantastic partnership accomplishment. Barbara Hepplewhite, the inspiration and driver of the project said. This is a fantastic achievement and shows how much the Limestone LinX is appreciated in the County. What a wonderful climax to the project this is, and follows a brilliant day everyone had at the official launch on Saturday’.

What an uplifting day. The Limestone LinX routes were officially launched on Saturday 6 October 2012 by County Councillor Dennis Morgan. In fantastic sunshine for an Autumn morning, nearly 40 cyclists and nearly 50 walkers then took part in separate guided cycle ride and walks. A fantastic mix of children, young people, and adults of a range of ages and abilities took part,including participants from surrounding villages. It was great to see so many young children participating either walking over four miles or cycling over 10 miles while thoroughly enjoying themselves.

In opening the event, also attended by County Councillor Mrs. Maria Plews and County Councillor Mac Williams, Councillor Morgan paid tribute to Parish Councillor and Coxhoe Community Partnership member, Barbara Hepplewhite. He commended Barbara for being the inspiration behind the walks and for working so hard over the last six years in partnership with others to complete the project. Barbara was given the honour of starting both the cycle ride and the walk by blowing the starting horn. Parish Councillor Stuart Dunn participated in the cycle ride.

The event, hosted by the Active Life Centre, was also attended by a range of officers of Durham County Council,both past and present, who have ut so much effort into the project and the launch arrangements. Councillor Morgan paid tribute to these individuals as well as all of the funders who had recognised the importance of the project by supporting it financially.

All those that completed the walk or cycle ride were presented with a commemorative medal, recognising their achievement. Everyone enjoyed themselves.

The Limestone LinX project has inspired others to undertake similar works. The East Durham Rural Corridor Area Action Partnership has undertaken some works to develop the routes to the East and West Rainton is also considering linking to the routes. A group of visitors from Finland also visited the project as part of their partnership work on Heritage Coastlines d were given a presentation by Coxhoe Community Partnership at the Active Life Centre in September 2012.

About the Limestone LinX

The Limestone LinX Cycle and Walkways is a developing project and the routes are situated in an undulating rural location in the hills and valleys covering Durham’s central limestone escarpment. The routes are generally well established and will withstand inclement weather.

The routes link the villages of Bowburn, Cassop, Coxhoe, Kelloe, Old Quarrington, Park Hill, Quarrington Hill, access the Crowtrees, Kings Wood, Little Wood, Cassop Vale and Raisby Way Nature Reserves and cover part of the Crowtrees Heritage Trail. From the routes there are commanding views of the surrounding countryside including Durham Cathedral, the Durham Dales and towards east Durham. The routes can be accessed at any point. Work on improving the routes and securing permissive footpaths for the use of bicycles in one area is ongoing. For example, there are works programmed to improve the stretch of the route along the Haul Road at Coxhoe. Care should therefore be taken by users along the routes and particularly along the Haul Road.