Unfortunately due to coronavirus these have been suspended till further notice.

The group is always looking for more volunteers as many hands make light work. If you are interested please text  the organiser Muriel Burton on 07821 658324 (text only please) .

Following issues of significant fouling raised by residents in early December with specific regard to routes along Sanderson Street and Parson’s Walk down to the school, County Councillors have worked with officers of the County Council who are to undertake a clearing up operation and undertake Warden visits to the areas concerned.

Some irresponsible dog owners are damaging the environment and putting children’s health at risk. Its a big problem and its not funny! Failing to clean up after dogs remains to be a serious problem in our villages despite awareness campaigns and the threat of fines.  As a result of concerns by residents, including responsible dog owners our village will be targeted by inspectors and the County Council boast a series of recent successful prosecutions against irresponsible owners. The message to irresponsibe dog owner is clear:

You must bag and bin your dog’s foul. If you don’t, you will be issued with a £100 Fixed Penalty Notice or fined a maximum of £1,000. Dog foul can cause toxocariasis, which may result in nausea, dizziness and even blindness.

The County Council have the power to prosecute but they can’t be always be in the right place to catch offences happening. They need the help of the community to report offences. They feel you can report irresponsible dog owners in confidence either online at www.durham.gov.uk/dogfouling, or by calling 03000 26 0000. If you see irresponsible dog owner’s failing to clean up after their dogs please let the County Council know the date and time of the dog fouling incident, the location, description of the dog and its owner, name/address (if known). 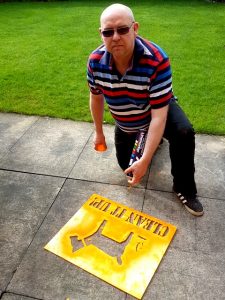 Following complaints raised by concerned residents Stuart targeted Cornforth Lane and Parson’s Walk during the summer by highlighting the problem using high visibility stenciling. His efforts are part of the Councils support to the Keep Coxhoe Clean Campaign.

Stuart, pictured above setting about his stenciling work, said, ‘Dog fouling continues to be a big problem in our villages and there appears to be a particular problem on the routes down to the school. The Parish Council has no specific powers to deal with enforcement. What we can do is try to raise awareness. As part of the Keep Coxhoe Clean Campaign we have leafleted all households, worked with parents and children, made regular website and social media posts and continue to lobby the County Council. By undertaking the stenciling we hope that we can highlight the problem to dogwalkers and perhaps prick their consciences.

Stuart has offered the stencils and spray paint to volunteers on social media. If you would like to undertake some awareness raising stencilling please contact the Parish Clerk.

The introduction of new enforcement powers for dog control have been met with overwhelming approval.

The new powers, which will mean irresponsible pet owners could be fined up to £1,000, are part of Durham County Council’s Public Space Protection Order (PSPO).

From August to December 2016, the County Council sought public views on the proposal to implement the PSPO, and found that 80% of res pondents to the consultation agreed with the proposal.

The consultation also found that the majority of those who took part supported the PSPO in the hope that it will:

The introduction of the PSPO will mean that from 1 June 2017  the following became a fineable offence in County Durham:

The existing offence for allowing a dog to foul without picking it up will continue under the PSPO. Find out more on the   Durham County Council Dog Control page.

Green Dog Walkers is a friendly, non-confrontational way to change attitudes towards dog fouling. The County Council believes that the majority of dog owners in our county are responsible and pick up after their pets. Green Dog Walkers was developed to give responsible dog walkers an identity, increase the availability of dog poop bags and act as a silent reminder to irresponsible dog owners that they need to pick up after their dog has fouled.

The Green Dog Walkers campaign was the idea of a local community group (Community Green Initiative) from Denny and Dunipace in Scotland who approached Falkirk Council for advice and support to help develop their idea. Green Dog Walkers sign a pledge to always clean up after their dogc arry extra dog bags to give to other dog walkers who don’t have one handy

Those who have taken the pledge are recognisable by the Green Dog Walkers logo worn in the form of a badge.

In the summer of 2011 the Parish Council and Coxhoe Community Partnership undertook a Household Survey as part of the preparation of the Coxhoe and Quarington Hill Parish Plan 2012-2017 or Parish Plan 2.

In view of these perceptions and because the Parish Council itself has no specific powers in respect of the environment it was considered that the Parish Council could work with Partners and the community through a public campaign. Proposals were placed in the action plans that accompanied the Parish Plan document which was adopted by the Parish Council in September 2012. Proposal C56 of the Coxhoe Action Plan and QH46 of the Quarrington Hill action place provides for such village based campaigns.

In October 2014, as part of plans for the Keep Coxhoe Clean Campaign, the Parish Council circulated a leaflet entitled ‘Please help put a stop to dog fouling in Coxhoe! Advice contained in the leaflet can be viewed in the Advice and Guidance section below.

In November 2014, Durham County Council launched their biggest ever campaign against fly tipping. This has been publicised as part of the Keep Coxhoe Clean Campaign and you can find out details on this page.

We all want our villages to be free of litter, fly tipping, dog fouling and vandalism. That aspiration is the aim of the campaign. We want our villages to be clean and attractive places in which to live, learn, play, work, shop and visit. The responsibility for street services is Durham County Council who have powers not only to clean streets but to take action against those who break the law and litter our streets. The County Council can do a great deal to improve our villages but times are tough and resources are becoming scarcer. As members of the community we have duties and responsibilities as well and the condition of our villages is partly within our control. Most of the problem is within everyone’s own control. This campaign is about asking the community to play their part while providing advice where possible and educating ourselves on what we can do as individuals, and as communities, to improve our environment.

The Campaign will therefore include:

Generally the Keep Coxhoe Clean Campaign advises the community to take responsibility for our improving our environment. ‘How can you help’, you might ask. Well you can do the following:

Specific Guidance on dog fouling is provided on the Parish Council leaflet which was issued to all householders in Winter 2014.

There is a great deal of advice and guidance on the website of Durham County Council. In particular check out the advice in the following links:

You can access current County Council Campaigns on the links below: