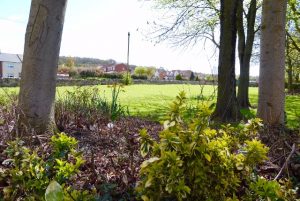 Welcome to the Coxhoe Village Green Heritage and Learning Project section of our website.

The Village Green based project has, as a result, evolved and extended to become a ‘Coxhoe Heritage Education and Learning Project’. Coxhoe History Group had previously made enquiries about a Village Atlas and asked if this could be included. This was supported and forms a significant part of the Master Plan. The development worker helping with the Village Green project suggested that this might be done through the Durham County Council Limestone Landscapes Project who have completed Village Atlases for a number of other villages.

After presentations by Tony Devos, Project Leader for Limestone Landscapes, the Parish Council have agreed to take this forward. A Village Atlas will also be carried out for Quarrington Hill so that the whole of the parish is included. The project would be carried out over a 3 year period and broken up into a series of small activities.
Specialists will be employed to work with any interested members of the community and groups on each activity. The results will be recorded and produced professionally and presented both in booklets and as a full Village Atlas document. The samples shown were very comprehensive and impressive and would be a wonderful record for future generations.

Village Atlas activities could include:

Coxhoe Parish Council and Coxhoe Community Partnership were working with Groundwork to develop an application for funding from the Heritage Lottery Fund to carry out the Atlas development. An initial application failed to achieve and award. An application was resubmitted and unfortunately this too has failed to secure a grant. Coxhoe Parish .Council and Coxhoe Community Partnership are now considering how to take the matter forward 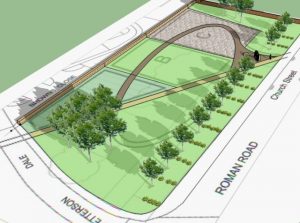 The first full phase of the Coxhoe Village Green Heritage and Learning Project has reached completion culminating in the unveiling of the pit wheel memorial in July 2014. The unveiling was part of the formal proceedings of the march of the Coxhoe Banner through the village en route to Durham Miner’s Gala on 12th July.

The improvement of the village green has been an important feature and proposal within Coxhoe and Quarrington Hill’s Parish Plan. It was an unfinished proposal in Parish Plan 1 and has commenced in earnest as part of Parish Plan 2 This plan was adopted after significant community engagement and consultation, including a household survey where over 80% of respondents supported the improvement of the villages important village greens.

The village greens were formally developed with terraced housing known as Long Row. They are important amenity sites within the village yet are underused and in need of improvement. A Working Group was established to implement the Parish Plans’ proposals which comprise of community volunteers and representatives of Coxhoe Banner Group, Coxhoe Community Partnership, Coxhoe Parish Council and Durham County Council. Regular requests for people to engage in the working group have been made within the Parish Council website and the Coxhoe Chronicle. The works so far are just a first phase. It is never to late to engage. Why not come and join us?

The last meeting of the Village Green Heritage and Learning Project was on 12th November 2014 in Coxhoe Village Hall At 6:15pm. At the meeting we pulled together ideas for future improvements with a view to producing an exhibition to take place in December and January to be launched at the Village Hall when the carol service takes place on 1st December.

The aims of the project have not been about making physical improvements to the village greens or just providing a pit wheel memorial. It has always been about getting people to participate and to use the two village greens in order to share the overall heritage of Coxhoe so people can learn about and experience Coxhoe’s diverse past in an accessible location within the village. It’s about bringing people and the past together while sustaining and conserving important public spaces in the future. Knowing our heritage and culture develops our sense of pride.

The September 2012 issue of the Chronicle and the Parish Plan pages on this community website included plans for the village green. The physical improvements include providing footpath links and seating within the site while using different forms of hard and soft landscaping to re-create, in central accessible areas aspects of our past heritage. A ‘centrepiece’ will be a pit wheel memorial that is being provided by the Coxhoe Banner Group.
Draft proposals for the Village Greens can be accessed below:

The Project Team then prepared an application to the Heritage Lottery Fund. Unfortunately this was unsuccessful. As a result Working Group the decided to scale down proposals and undertake a smaller scheme, hopefully as phase 1 of the works until such a time as additional funds might be available.

Towards the end of 2013, as part of the improvements a number of lime trees and spring bulbs were planted on both village greens. The avenue of Lime Trees is now well established. Their aim was to identify the location of the former miners cottages. A host of golden daffodils and crocus came through earlier in the spring depicting the former side boundaries of ‘Long Row’.

Further plans were published in the March 2014 edition of the Coxhoe Chronicle. The first phase works now involve the erection of the Miner’s Wheel on a curved plinth wall that also provides low level seating just down from St Joseph’s Catholic Church. A new footpath now runs diagonally across the site from the wheel to the corner of Brown’s Close and a new elliptical path has been created in the centre to help the longer term aim of defining the three distinct periods of Coxhoe’ s history. The three areas will be formed from coal; York Stone; and Cobles with crushed stone paths. Half of the ellipse has only beeen identified be a slight mound to create a local wildflower meadow. The funding for this phase was made up of a £20,000 Section 106 planning gain donation from Barratts for the second phase of the Limes development, a £10,000 Donation from local County Councillors Blakey, Plews and Williams, and £5,000 from Coxhoe Parish Council. The Parish Council is also purchasing the green from Durham County Council to preserve it as a Village Green for the community.

As indicated above the Group made an unsuccessful bid to the Heritage Lottery Fund for this project, which failed because they did not want to fund the hard landscaping parts of the project. It is hoped that by completing these parts a resubmitted bid will allow for the ‘People’ parts of the scheme to go forward to complete the top green This involves researching the village’s history, and developing artworks, display boards and sculpture pieces and planting to commemorate Coxhoe’s rich history by residents and young people from the village, and events to mark these. Details of how to get involved with this stage will follow later.

The aims of the overall project were to:

It is hoped that project will include a wide variety of activities which we hope will appeal to all ages and give lots of opportunities to become involved. Some ideas include:

There’ll be more information appearing on this page and in the future issues of the Coxhoe Chronicle when the Village Green Working Group is reconvened in the future.

Invites for people to join the Working Group and participate as well as project progress have been publicised widely in many editions of the Coxhoe Chronicle, within this website and on the Parish Council Facebook site.

Following the planting of lime trees and spring flowers to mark the location of Long Row, works have finally been completed on the groundworks that has seen the provision of footpaths and the establishment of the pit wheel memorial.

The Village Green Project has been about improving both village greens in Coxhoe by recognising all aspects of Coxhoe’s heritage and industrial past, not just related to mining. Having failed in its attempts to get some Heritage Grant aid to support the overall project, the Village Green Improvement Project Working Group agreed to scale down the initial proposals in order to use existing resources. A tendering process was undertaken in February and April and a contractor was appointed in April. Work commenced in early May and it was planned that works will be finished in time for the Miners Gala in July. The pit wheel was unveiled on 12th July as part of the Durham Miners Day celebrations

The pit wheel, a long term proposal by Coxhoe Banner Group, is a part of the first phase which has also included tree planting and the provision of footpaths of various surfacing materials to allow people to enjoy an important open space in the village.At the unveilling of the pit wheel the Coxhoe Banner Group dedicated the structure and land to the community in the cutodianship of Coxhoe Parish Council.

A guided heritage walk, led by the Coxhoe History Group, was also held in April 2013 culminating in a display at the Village Hall and was attended by around 100 people.

To encourage people to participate and help the Coxhoe Village Green Heritage and Learning Project Working Group have held an exhibition in the Village Hall throughout December and January. It was launched on 1st December 2014 on the night of the Village Hall Carol Service and lasted to the end of January. Everyone was encouraged to go along to the exhibition, have a look and complete a questionnaire available at the display. Alternatively, opportunities were given to access a copy of the display from the link below or complete a questionnaire online using the ‘survey monkey’ facility.

The completed questionnaires which were small in number were independently collated by Groundwork but did not provide many ideas. Indeed only 7 responses were received. You can access the results here:

The Working Group subsequently agreed the following revised Master Plan which was published in the Coxhoe Chronicle in June 2015:

Next Meeting of Working Group

The next meeting of the Village Green Heritage and Learning Project will be announced here. We are always looking for people with ideas and skills to come along to our Working Group meetings to help develop and implement this project. Why not come along.

The Coxhoe Village Green Heritage and Learning Project has won its first award. At the prestigious County Durham Partnership Environmental Awards held at the Radisson in Durham on 13th November 2014, the village green improvement scheme gained the award in the Places and Spaces category for its ‘outstanding contribution to the improvement of the local environment of Coxhoe in a community led manner’. The award was presented to representatives of the Coxhoe Village Green Improvement Working Group by County Council Chairman John Robinson.

This is a fantastic achievement bearing in mind that, at the same event, awards were given to muli-million pound developments such as the DurhaThe awardm University Business School extensions. The Environmental Awards is in its 25th year and had a record amount of entries and nominations. It is a great achievement for the village to have won such an award. Well done to all those who have contributed to the project and all those who have shown their support. Coxhoe ought to be proud of this recognition.

This is the second time in three years that Coxhoe has received an Environmental Award. In 2012, Coxhoe Community Partnership received an award for their outstanding work on the Limestone LinX project. Both of these awards will be on display in the Parish Offices and meeting room in Coxhoe Village Hall.

If you would like to know more about Coxhoe’s history, take a look at the Coxhoe Local History Group website.