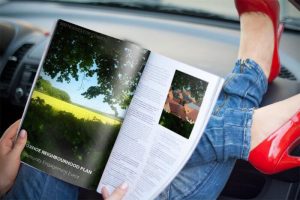 Neighbourhood Plan to be completed 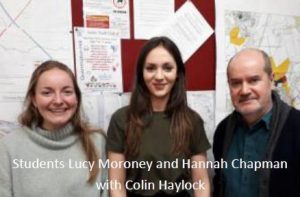 Support given in early stages of Neighbourhood Plan progress.

The Parish Council have been fortunate to have been offered some independent expert support to our work on planning.

Colin Haylock (a former Visiting Professor of Practice at Newcastle University) is running a project looking across England at care for the environmental quality of places when groups are working on Neighbourhood Plans.

Over late spring he worked with us together with two final year planning students from
Newcastle University.  Colin and the students were particularly interested in how we can manage any future development in a way which will strengthen rather than damage the distinctive character of Coxhoe and Quarrington Hill Villages. They produced a report for us on completion of their work.  We hope this will help us in both our responses to the further work by the County on the Local Plan and our work on our own Neighbourhood Plan.

We have also had another town planner come forward to volunteer to assist us. 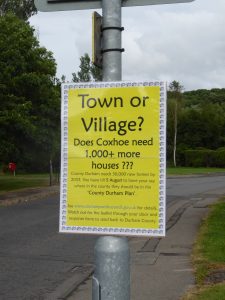 The next Neighbourhood Planning open meeting has yet to be arranged. If you would like to be part of the working group, please get in touch with the Parish Clerk at clerk@coxhoeparishcouncil.gov.uk.

What is a Neighbourhood Plan?

Neighbourhood planning gives communities direct power to develop a shared vision for their neighbourhood and shape the development and growth of their local area. They are able to choose where they want new homes, shops and offices to be built, have their say on what those new buildings should look like and what infrastructure should be provided, and grant planning permission for the new buildings they want to see go ahead. Neighbourhood planning provides a powerful set of tools for local people to ensure that they get the right types of development for their community where the ambition of the neighbourhood is aligned with the strategic needs and priorities of the wider local area.

Local communities can choose to:

Neighbourhood planning is not a legal requirement but a right which communities in England can choose to use. Communities may decide that they could achieve the outcomes they want to see through other planning routes, such as incorporating their proposals for the neighbourhood into the Local Plan, or through other planning mechanisms such as Local Development Orders and supplementary planning documents or through pre-application consultation on development proposals.

At the end of February 2015 the Parish Council made an application to Durham County Council to Designate an area for a Neighbourhood Plan. This was publicised in the March edition of the Coxhoe Chronicle delivered to all business and households. Local residents and businesses were being asked to comment on the first stage of a process that could see Coxhoe Parish Council and local people have more say on planning policy in the area.

Coxhoe Parish Council asked Durham County Council to have the Parish of Coxhoe designated as such an Neighbourhood Area. This was the first step towards setting a Neighbourhood Plan which allows our local communities to specify the kind of development they would like to see in their local area. A copy of the application and public notice can be downloaded here:

Durham County Council granted approval to the designation on 17 April 2015. A copy of the decision notice can be found here:

As a result of the approval by Durham County Council of hundreds of houses in and around Coxhoe recently and with many more planned or likely, it is important to make progress on the Neighbourhood Plan urgently. In view of this an initial and open public meeting took plac on Wednesday 21 October 2015 in Coxhoe Village Hall.

The open invitation to the meeting went out to parishioners and business proprietors based in Coxhoe who have an interest in this matter and wanted to get their views across and/or wanted to be actively involved in joining/forming a working group of local people (parish based) that can provide input into this work.

Over 50 people, principally residents attended the meeting with Parish Councillors and a County Councillor present. Some residents from nearby Parkhill came along and shared their experiences.

Chair of the Parish Council, Councillor Stuart Dunn gave a presentation on the potential threat to Coxhoe from the myriad of planning proposals considered or under consideration by Durham County Council. He indicated that some 500 houses had either been approved or were about to be approved by County Council. Most of these applications had been objected to by the Parish Council. In explaining the current countywide planning position he noted that there were many sites which could possibly come forward in the near future. In doing so he noted the Parish Council’s concerns about the implications including effects on character, schools and health. Stuart highlighted the recent approval of 190 dwellings at Parkhill made it clear that both Coxhoe Parish Council and local County Councillors, together with residents and other groups, had made strong written and verbal representations to no avail. It was the nature of the complete turn around by planners and their reasons for doing so which was worrying.

Following a short contribution by Richard Cowen, who shared the Parkhill experience, the meeting was opened up to attendees. There were a myriad of issues raised and questions asked including:

It was important that people had their say and while perhaps the meeting therefore failed to fully explore what a neighbourhood plan could do for Coxhoe and Quarrington Hill there was a clear message from those present that Coxhoe did not want any more housing development.

In closing Councillor Dunn thanked everyone for turning up, having their say and offering help. He repeated his plea for people to join with the Parish Council in moving forward. He advised that this meeting was the first step in engaging the community and that the Parish Council would take away the outcomes to consider the way forward and there would be further meetings in the future. A copy of the presentation is available here:

Open meetings were subsequently held on 16 December 2015 and 13 January 2016. The County Council were represented at a meeting of Coxhoe Community Partnership on 25 November. You can see the minutes of these meetings below.

The community held a Neighbourhood Planning Community Event at Coxhoe Village Hall on Saturday 9 April 2016. The purpose was to find out what people feel are the real planning issues in our villages and how they might be resolved. Details of the event was set out in the supplement which was delivered to all households with the March editions of the Coxhoe and Quarrington Chronicles over the next few weeks. Around a dozen members of the community joined Parish Councillors and members of Coxhoe Community Partnership to engage about the future of our villages. The event was independently facilitated by Durham Community Action. The presentations and exhibition material at the event can be accessed below or from our virtual Neighbourhood Planning library which can be found here.. A report of the event incorporating the notes taken at the event by Durham Community Action has been prepared and is available here:

Another meeting of the Neighbourhood Planning Steering Committee will also be held in due course to decide on what happens next:

Additional events, including those aimed at businesses will be taking place in subsequent months.

We undertook an initial Neighbourhood Plan community survey during 2017. Thank you to the people who took the time out to complete the survey.

There was a prize draw with the questionnaire which went out to all households. In addition there was an on-line questionnaire. The £100 winner of the Prize draw wishes to be anonymous. Second prize of £50 goes to Ellie Cutter of Coxhoe and the third prize of £25 goes to Kathy Allen of Coxhoe.

You would have received a yellow Neighbourhood Planning Questionnaire with your March edition of The Chronicle. The Chronicle was delivered in the first week in March by volunteers. This survey was also available online, if you or other members of  your household preferred to complete the form electronically.

We had sought the communities views on what are the issues in the villages and how they may be resolved through a Neighbourhood Plan. We were interested in finding out the following: 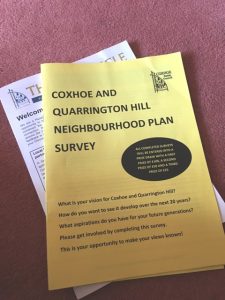 A Neighbourhood Plan can help local communities to guide and influence the future development and growth of the area in which they live and work.  The Department of Communities and Local Government has made funding available to provide support and grants to help prepare a Neighbourhood Plan.

Plans can be used to do things such as:

Your views were very important to this process

The Parish Council will fully support the preparation of a Neighbourhood Plan and will engage with the local community during the process. However, the Parish Council cannot do this on its own, so if a Neighbourhood Plan is to proceed will need a Steering Group formed from residents and businesses.  Please let us know if you feel you want to get involved by contacting:

Further information about neighbourhood planning in Coxhoe and Quarrington Hill can be found on these pages or by contacting the Parish Clerk.

This survey was also available online, if you or other members of your household wanted to complete the form electronically. .

Further information about neighbourhood planning in Coxhoe and Quarrington Hill can be found on these pages or by contacting the Parish Clerk on the above contact details.

Our Community Engagement Officer was to collate the responses to this survey and work with the Steering Group supporting them and the Council through the process of developing the plan. The Council is also eligible for grant funding to bring in any specialist consultants required to develop any necessary planning policies arising from the plan.

Coxhoe Parish Council has put the development of a neighbourhood plan on hold.

Find out more about neighbourhood planning

You can find out more about neighbourhood planning via the links below:

The Governments Guidance on neighbourhood Planning can be accessed from the link below:

You may need a product like Adobe Reader (free download) to view our PDF documents on our website. All PDF’s on this page were published prior to 23 September 2018