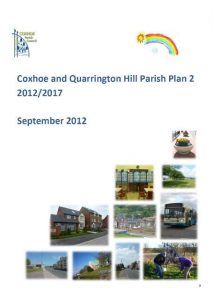 On September 5 2012 Coxhoe Parish Council ‘adopted’ its second Parish Plan, known as Parish Plan 2 (PP2). The Parish Council wanted to ensure that the new Parish Plan was at least as ambitious and aspirational as the current one. It also wanted to ensure that the communities of Coxhoe and Quarrington Hill were fully engaged in its production and implementation. It worked with the two village partnerships, Durham County Council and the County Durham Rural Community Council to develop the new planning document. The plan was produced at a time where County Durham’s Sustainable Community Strategy had been adopted and the Local Development Framework was under preparation. The Parish Plan reflected and supported these two important strategic planning documents while reflecting the priorities of the communities of Coxhoe and Quarrington Hill. This is how we went about doing it.

In October 2010 the Parish Council developed a draft plan of action for producing ‘Parish Plan 2’. A draft Project Plan was considered at the monthly Meeting of Coxhoe Parish Council on 27 October 2010. It was agreed that the principles of the draft project plan be agreed as the basis of discussions with community representatives and partners. This was very much a draft. The Council considered that the project plan was very ambitious. While it has subsequently been amended to reflect discussions that took at the Parish Council meeting it was only indicative of timelines and actions. The Project Plan identified a need to establish a steering group comprising of community representatives and partners and they will assist in developing the detail of the project.

The Parish Council considered that the most important thing is achieving a plan which meets community priority and which has the support and ownership of partners who will be responsible for ensuring and securing its implementation. The Parish Council felt strongly that the success of the plan is about the value of its content and its ability to be implemented and not about how long it takes to prepare. It was about getting the plan and the process right. However the aim of the project plan was to try to ensure that the development of the Plan in a timely manner.

The project plan was made available on the website for people to comment upon and changed as a result of views received and progress made. It was therefore a ‘living’ document. The project plan is available in the following documents:

In December 2010 we produced our Parish Plan 2 launch document entitled ‘ A New Year- A New Plan’. This gave detail of what has been achieved as a result of the last Parish Plan. More importantly, it set out how we were considering going about engaging our communities. It asked our communities to let us know their views on some key questions as we considered how we were to move forward. Volunteers delivered a copy to all households in Coxhoe and Quarrington Hill just before Christmas. You can access the PP2 Launch Document

Our first community engagement events focusing on Quarrington Hill and Coxhoe took place on Saturday 19 February 2011 at Quarrington Hill Community Centre and Saturday 5 March 2011 at Coxhoe Village Hall . There was a good turnout at both events There was a great debate about the issues facing our villages including leisure, housing, traffic and public services. The initial feedback from residents will assist us in producing our next phase of the communities’ work which is the production of a household questionnaire. You can see the outcomes from these initial events in the following documents:

Photos of our events can also be accessed in our Parish Plan 2 Photographic Record Record in the Photo Gallery section of our website.

A separate Business Forum was held with business people in Coxhoe on 14 March 2011. The Steering Group received the following report from that meeting:

All these events were well publicised in the villages through leaflet drops, in community newsletters and on the community website.You can access a copy of our first community consultation event publicity leaflet here:

At the Steering Group Meeting on 17 March 2011 it was decided to slow the pace down on the Parish Plan in view of need to focus the communities efforts on saving the Leisure Centre. However in doing that the Steering Group, with the help of volunteers developed a Household Survey questionnaire based on the results of the initial community engagement events and the events of the time.

How was the household survey undertaken?

We provided paper copies to all households and businesses as we could. We asked residents to return these to:

In addition we made arrangements so that the community could also complete the questionnaire on line by going to durhamrcc.org.uk and following the website based Household Surveys. This proved a very popular option.

The period for responding to the Parish Plan 2 Household Questionnaire lasted for about a month between June and July 2012. there was a 17% turnout from Coxhoe and a 27% turnout form Quarrington Hill. The views submitted were important to us and have helped to shape the future of Coxhoe over the next five years.

Durham Rural Community Council collected all the results and independently published them. The results can be obtained from the following documents:

In order to summarise the results and communicate these to the communities of Coxhoe and Quarrington Hill the Parish Council produced the following Headline Results Documents which were circulated to all households:

There was also a presentation on the results of the Parish Plan Household Survey immediately before the AAP Forum meeting which took place on Tuesday 15 November. This exhibition was then transferred to Coxhoe Leisure Centre and remained on display for several weeks.

A meeting with local volunteers on 16 February 2012 took place in Landsdowne House Coxhoe to specifically discuss the Coxhoe Action Plan. A similar meeting had taken place the previous week in Quarrington Hill to develop that village’s action plan. It was proposed that following that meeting the Draft Parish Plan 2 and the developed action plans would be reported to the Parish Council’s Finance Committee at their meeting on 21st March. After consideration in April, it was agreed at that meeting the Draft Plan would then be formally launched by way of a six week consultation period. Exhibitions would be held in Coxhoe and Quarrington Hill during that consultation period. The details of this were agreed at the Parish Council Meeting in April 2012.

Approval of Draft for Consultation

The Parish Council considered and approved Parish Plan 2 Draft for Consultation at its monthly meeting on 4 April 2012.

A formal consultation period commenced on 30 June. The consultation was promoted in the June editions of the Coxhoe Chronicle and Hill Talk. Exhibitions were held in both villages and every household in the parish received a summary of proposals for their relevant village. The Quarrington Hill exhibition took place on 30th June and the Coxhoe exhibition was undertaken on 7 July. Following that exhibition an unmanned exhibition was on display at Coxhoe Leisure Centre for two weeks. You can download a full copy of the Draft Plan and the action plans which form its annexes from the following documents:

Draft proposals for the Village Greens can be accessed below:

As indicated above a summary document for both Coxhoe and Quarrington Hill had been prepared which summarises the Plan Proposals and Policies. This was delivered to all households and Businesses with the June edition of the Coxhoe Chronicle and Hill Talk. You can access these below:

Comments were also able to be made by e-mail or in writing to the Parish Clerk.

There were a number of representations received and these were fully reported to the monthly meeting of Coxhoe Parish Council on 5 September 2012. Members considered the representations and resolved to ‘adopt’ the plan and the action plans. You can access the final Parish Plan document and the accompanying action plans from the links below:

Coxhoe Parish Council would like to thank all those who participated in meetings and community events, those who completed the household survey and otherwise submitted their views to the Parish Council. It wishes to place on record its thanks to Coxhoe Community Partnership and Durham Rural Community Council for their work on supporting the development of the Plan. Without these people, organisations or and the communities of Coxhoe and Quarrington Hill the development of this plan would not have been possible.

Coxhoe Parish Council considers that the proposals in the adopted plan are practical and achievable in the current economic and social climate.

During October 2010 the Parish Council were consulted by Durham County council on the Strategic Housing Land Availability Assessment or ‘SHLAA’. This is an important document as it will set out a housing land supply for the County Durham for the next 5 years. The Parish Council are concerned about allowing any significant more housing in the village before there are significant improvements in the social infrastructure of the village including school places and health facilities. It has therefore made strong representations to the County Council because of potential implications of SHLAA sites to our villages. You can access our response from the link below: