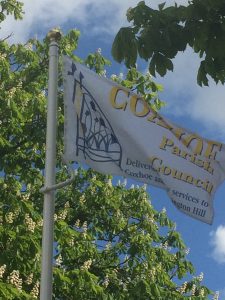 During October and November 2020, the Parish Council consulted on six separate topics. Councillors thank residents for giving their views and comments, and recognise that some issues are very sensitive for residents, such as the Churchyard at Quarrington Hill. Thank you to all who took part. The results are summarised below.

Do you think Quarrington Hill Churchyard should be closed to future burials?
Yes 16
No 144
Abstained 5

a) Would you support Coxhoe Parish Council taking on the maintenance of the open churchyard from the Parochial Church Council to allow burials to continue?
Yes 144
No 18
Abstained 3

b) Do you think that Coxhoe Parish Council should challenge the closure application to the Ministry of Justice by the Parochial Church Council?
Yes 151
No 12
Abstained 2

c) Do you think remedial works should be carried out as soon as possible to enable the churchyard to be re-opened for visitors to the graves?
Yes 160
No 2
Abstained 3

Does Quarrington Hill need more housing in the village?
Yes 9
No 46
Abstained 5

a) If yes would you support potential development of the extension of Neil Crescent?
Yes 10
No 58
Abstained 2

b) If yes where else do you think might be suitable?
Comments:

1. Nowhere
2. new houses already built utilising spaces, we live in a village with green spaces still around and should remain this way, more houses put strain on resources such as school/ nursery places available.
3.None
4. Nowhere in the village
5. Area outlined in blue. Extension to Neil Crescent.
6. NO where over populated and the amount of cars in the village it’s so gridlocked.
7. opposite the hawthorn terrace bus stop (the tree section only but not the footpath behind this; this footpath should be the boundary) or possibly a small extension next to Neil Crescent but retaining a still large village green (the one behind mahils shop).
8. Coxhoe
9. Rear of Steetley Terrace and opposite the Industrial Estate. On the site of the old bus garage, Holdens coal yard and the Industrial Estate.
10. The area in the proposed plan, providing further amenities are also provided for the extra residents.
11. Nowhere suitable as all liable subsidence from pit falls…
12. No where
13. Not relevant. No suitable spaces.
14. Green behind community centre at the bottom
15. Nowhere, we risk losing our safe green spaces for children to play in, safely away from main roads. Also more housing and a lack of facilities, no parking, limited access roads, more traffic and pollution.
16. Not here
17. No where there is enough
18. Not sure
19. Football feild near the industrial estate.

c) Do you support the proposal to plant an avenue of Cherry Trees down the path in the green field behind the community centre and further tree planting around the edges?
Yes 44
No 16
Abstained 2

d) Would you support a settlement boundary around the existing village boundaries to protect the open countryside surrounding Quarrington Hill?
Yes 53
No 5
Abstained 2

1. Land behind David Terrace is used by residents for garages and parking to help the parking situation on the main road. The garages are used and the area is kept tidy and planted nicely for the village where a lot of people walk their dogs
2. i agree with proposal to plant trees down the path in the green field but maybe not all around edges, the existing trees that are near residents gardens shed vast amounts of leaves in damp conditions leaving slippy conditions and alot of extra work to clear up
3. Regarding any proposed building behind the community center and along side Neil crescent a lot of the residents around the village rent a garage on the site behind david terrace if they didn’t have these garages it would mean they would struggle to park safely outside there own properties without causing hazard to cars and pedestrians as a lot of households have more than one vehicle and rely on these garages and the space around these garages when there is no other parking to be had, also a lot of children and dog walkers use this land for recreation purposes as it is very handy for people who cannot walk great distances to be able to walk out there door and access this free space , we feel personally quarrington hill has enough properties for the services we have for example the school is at capacity especially the parking outside the school at pick up drop off times
4. Work required at tommy memorial.
5. Further tree planting around the village please.
6. I live at [] quarrington hill. The public footpath /garage site path /road in urgent state of repair
7. Being a small village there are not enough amenities to support any further buildings.
8. I believe only a small development would be suitable. I strongly believe that bringing new houses would attract new blood into the community and thereby help with bringing money into the village which could in turn result in more business’ needed (which is good for the local shops). There still should be a limit and the boundary idea is great for this purpose. Would not support if we loose the village green behind mahils shop.
9. Quarrington Hill needs to keep its village feel, the cherry trees are a great idea if they are protected from kids and anti social behaviour. The village needs to deal with its problems such as anti social behaviour, littering, flytipping and improving what we have before attempting to expand the area and create more issues with increased traffic and such like, there are not enough green spaces without destroying the ones we have.
10. More housing would bring more people to the village but amenities in the village are not sufficient to support this. If this goes ahead I would expect to see more money going into parks for the children, maybe one on the area near to the proposed development site.
11. Also making the village more appealing to potential residents. The bus stops are dirty and do not encourage people to use them. There is a telephone box on the front street which looks like it hasn’t worked for the last 10 years. More dog litter bins or something to get rid of all the dog poo on the paths, [] Improvement to drainage and gritting over the bad weather months, paths and roads are often flooded. Parking areas would also be useful to stop everyone parking on the front street. More people in the village=more traffic and cars.
12. The cherry trees down either side of the main path would look beautiful but planting other trees around the perimeter and on the green will only block out light in later years for the people who live around the grass area. Also root damage to properties Could be a problem in later years. The field at the moment is never cut sufficiently well and adding in other obstacles for the grass cutters to cut around will only add to the unsightly cutting of the grass.
13. Cherry trees yes other invasive trees no, we need a boundary settlement!!
14. Trees will block out light and damage to houses from tree roots will be a concern
15. A boundary settlement is needed so we Can stay a small village community like we have always been. No more houses!!
16. No more houses in Quarrington Hill, we need to take care of the ones we already have! A boundary settlement is a great idea and very much needed!!
17. The village is beset with traffic problems at present. Increasing the traffic flow would further increase this. The road known as the Briar is being eroded by the use of larvae wagons and articulated lorries. Speed restrictions have not been effective in Quarrington Hill.
18. Children would also benefit from a playground on green behind community centre or behind WM club. Most of the houses in village are that side of the road and would avoid children having to cross main road to get to playground as then do now
19. [] have massive concerns with the amount of traffic, noise, the extra pressure on the available local facilities/school, the impact on the quality of life of the residents in the surrounding estates and the loss of green space accessable to those with disabilities.
20. Rather than trying to bring more people to a small village maybe the council should try doing something with the police about the brazen drug dealers openly dealing in the village.
21. Would be nice to have a local shop like a Morrisons,Tesco, Salisbury to have in the village maybe around Neil Crescent.
22. Field needs better lighting

Do traffic problems on Cornforth Lane Coxhoe need to be sorted?
Yes 194
No 3
Abstained 3

a) Would you support the Parish Council acquiring land behind Cornforth Lane, if possible, to provide additional off-street residents parking off Cornforth Lane and potential new parking restriction?
Yes 175
No 23
Abstained 2

b) Would you support the Parish Council acquiring land behind Cornforth Lane to provide drop off and pick up parking off the roundabout to remove school traffic from Cornforth Lane?
Yes 180
No 19
Abstained 1

c) Would you support the Parish Council acquiring land next to the Active Life Centre to provide additional football and sports fields for local teams to play in the village?
Yes 180
No 18
Abstained 2

Consultation on parking in Coxhoe

Does Coxhoe need more parking for local businesses to trade?
Yes 122
No 19
Abstained 1

(a) Would you support the joining of the Coxhoe Village Hall and Co-Op car parks with additional spaces being provided?
Yes 131
No 16
Abstained 0

(b) Would you support rear entrances to the Front Street properties if the bungalow or GP surgery development goes ahead for use by Front Street Traders and residents?
Yes 132
No 10
Abstained 5

(c) Would you support opening of a long stay car park on land in front of Coxhoe Commercial Motors at Commercial Road to provide long stay parking for traders and their staff and customers?
Yes 113
No 33
Abstained 2

Consultation on GP Surgery and the Front Street

Does Coxhoe need a new GPs surgery off the Front Street?
Yes 175
No 37
Abstained 5

(a) Should the Parish Council include its adjoining land with the developers land to enable building of 10 bungalows for rent?
Yes 154
No 60
Abstained 4

(b) If the CCG and GPs decide not to join the scheme, do you think houses should be built on the Old School or another 5 bungalows for rent?
Houses 27
Bungalows 180
Abstained 11

(c) Should this development help fund improvements to the adjoining Coxhoe Churchyard such as upgrading of and new paths, fences and potentially a memorial garden for burying ashes?
Yes 199
No 14
Abstained 3

Is the retention of a village identity important to the people of Coxhoe?
Yes 229
No 52
Abstained 5

a) Would you support a settlement boundary around the existing village boundaries to protect the open countryside surrounding Coxhoe?
Yes 238
No 47
Abstained 1

c) If you do think the village needs more housing to be built, what kind of extra homes are needed and where?
Comments:

d) Should the green areas around Coxhoe and Quarrington Hill be protected and improved?
Yes 248
No 38
Abstained 0