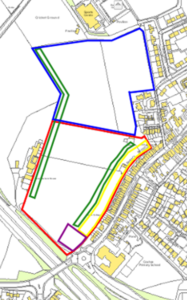 Do traffic problems on Cornforth Lane Coxhoe need to be sorted?

You may have seen that Durham County Council are currently carrying out a Statutory consultation on camera enforcement of the ‘No Entry – Except Buses’ restriction at the school end of Cornforth Lane which closes on 4 November 2020. If there are no objections from the Emergency Services or Bus operators a public consultation will follow.

It shouldn’t be necessary, but sadly many cars, vans and trucks regularly abuse it, and often at high speed. There have been a number accidents, thankfully none involving school children.

Under the assumptions of the emerging County Durham Plan it was envisaged that Coxhoe would not continue to grow. As the village has grown in recent years, so has the school so that Coxhoe children can go to their local school.

The problems caused by residents from the rest of the village for the residents of Cornforth Lane have been a long-standing issue that Coxhoe Parish Council has tried to influence, holding numerous consultations and public meetings on the subject, but only limited improvements have arisen such as the Sanderson Street restrictions and close to the current Doctors surgery. This is also a vital bus route.

With the housing developments that are under way another extension is required, and so it is proposed to convert the existing hall in to two additional classrooms and build a new hall fit for a full 2 form entry primary school. Works are likely to start in 2022/23. Unfortunately, this growth and increased car usage this has made parking and traffic issues on Cornforth Lane much worse.

Coxhoe Parish Council had the benefit of two Newcastle University students who produced a report for their degrees in Town Planning in May 2018 on potential issues for Coxhoe Parish Council’s emerging Neighbourhood Plan, including the school issue and lack of play space for the school, local teams and community, and they came up with a number of long-term suggested solutions.

The Red (45,000 square metres) and Blue (40,000 square metres) fields behind Cornforth Lane are potentially at risk of further market led development unless protected by a Neighbourhood Plan or possibly designated for community infrastructure as suggested by the Newcastle University students’ report. At its meeting in June, the Parish Council made some bold proposals to try to tackle these issues.

If Coxhoe Parish Council was able to buy the Red and Blue Fields, a number of long-term solutions could potentially be delivered:

1. Disposing of up to a 20 metre strip to each of the residents of Gladstone Terrace, Kenmir Buildings, Barker Buildings, Garden Crescent and Grove Cottages, all on Cornforth Lane (shown edged yellow on the plan), 43 properties in total, to provide them with two off street parking spaces, garden ground, a rear fence and a tree belt (shown edged green) to protect from noise from Stray Aid and the motorway. this could help offset the land purchase costs for the Parish Council;

2. Another strip of tree planting could be installed along the boundary with Stray Aid also shown edged green, which could also have a considerable positive impact on residents living quite a way from Stray Aid but suffering from noise effects from it;

3. Further parking could be provided for the Cricket Ground and Active Life Centre extending by the existing car park and stopping cars being displaced into Linden Grove;

4. Provide for off street parking for the extended Coxhoe Primary School in the area shown edged purple for the 43 percent of parents who currently choose to or ‘need’ to drive their children to school. The access could be from a new fourth entrance onto the mini roundabout avoiding the need for these cars to access Cornforth Lane at all;

5. It could provide a much safer entrance to Stray Aid, which is a charitable trust;

7. Provide a much safer bus route, and walking to school route and massively reduce the number of accidents and damage to cars reported each year on Cornforth Lane;

8. The remainder of the area could be turned in to two further football / sports fields for both community, school and use by local teams such as Coxhoe United, rather than displacing half of their teams elsewhere for training and matches. These additional fields could then potentially qualify Coxhoe for significant FA funding for conversion of these fields into 3G pitches.

Clearly none of the above issues are possible without land ownership. The Parish Council has therefore had exploratory discussions with the landowners of the Red and Blue land, to see if they would be prepared to consider disposing of the land to the Parish Council for community use, and if so at what cost. We await formal responses from them.

This may seem like a considerable investment of time and resource by the Parish Council, which would largely benefit the residents of one street of 200 houses, BUT, that street is blighted by the location of our Outstanding Primary School at the end of it, and problems caused by parents from all over the rest of the village who are likely to continue to drive to school.

If all of our proposals come together, however, we could have school, doctors and leisure facilities which are fit for the size of our village, all of which are things that have been sought for a very long time?

To see other consultations, please visit our Consulting our Communities page.

Thank you to all who took part. The results are summarised below.

Do traffic problems on Cornforth Lane Coxhoe need to be sorted?
Yes 194
No 3
Abstained 3

a) Would you support the Parish Council acquiring land behind Cornforth Lane, if possible, to provide additional off-street residents parking off Cornforth Lane and potential new parking restriction?
Yes 175
No 23
Abstained 2

b) Would you support the Parish Council acquiring land behind Cornforth Lane to provide drop off and pick up parking off the roundabout to remove school traffic from Cornforth Lane?
Yes 180
No 19
Abstained 1

c) Would you support the Parish Council acquiring land next to the Active Life Centre to provide additional football and sports fields for local teams to play in the village?
Yes 180
No 18
Abstained 2